Bitcoin Price Could Reach $1 Million by end of 2020: John McAfee 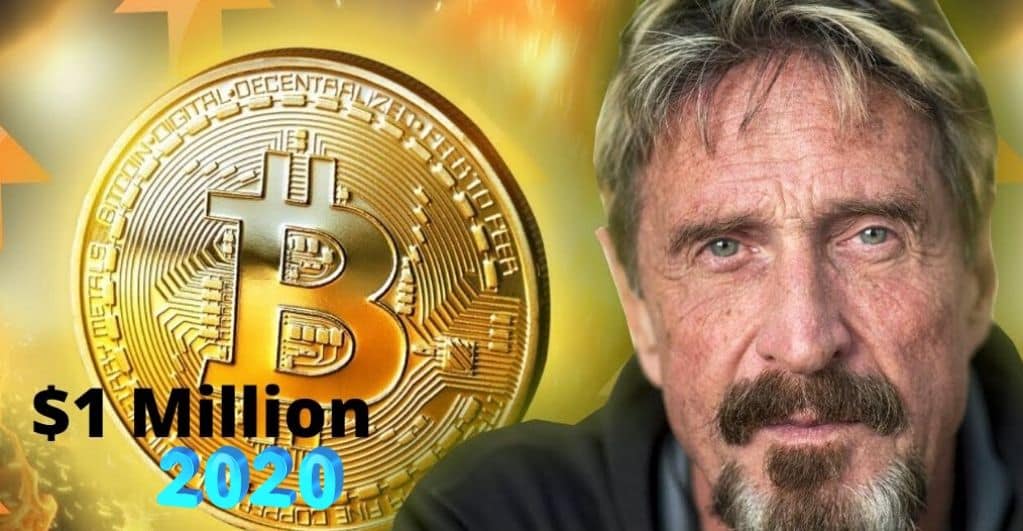 It was on July 17, 2017, when Bitcoin had not gained such massive popularity, the cybersecurity developer John McAfee made a prediction, regarding the price of Bitcoins, that it would reach $500,000 by the end of 2020. But later on, he changed his statement and told that as the Bitcoin prediction that he made was based on a model used when Bitcoin was priced at $5,000, and as now that has increased to $20,000 by December 2017, the model is now predicting $1 million by the end of 2020.

But with less than 365 days left to go for McAfee’s prediction to come true, Bitcoin enthusiasts seem very concerned with the price hike as the Bitcoin price is currently trading at only $7,200 which is far away from reaching the target. In fact, Bitcoin is trading at a price that is 95% below the projection.  To reach the targeted prediction, Bitcoin should be trading at $171,000 per BTC as of now, and continue to grow at a rate of 0.484095526 per day, which is actually not happening. So, whether the predictions of McAfee would come true or not is a million-dollar question, to which millions of people are waiting for the right hour to come.

If McAfee’s prediction is true then you should invest money in Bitcoin to earn good profit from it. There are a number of trading platforms available in the market. Bitcoin Era is one of the unique and secure automated trading robots.
Visit bitcoinera-review.com to check the Bitcoin Era Review.

McAfee reasoned out for such a target prediction based on the total supply of Bitcoins. He once said in an interview,

Let’s get real, there are only 21 million Bitcoins. Seven million of which have been lost forever, and then, if Satoshi [Bitcoin’s anonymous creator] is dead, add a few more million.

In any case, just run some numbers. If Bitcoin gets to be 5% of world financial transactions, which, you all know it will, maybe 10% or 20%, then Bitcoin would be worth $10 million per coin, based on those numbers.

The Bitcoin enthusiasts went frenzy after McAfee made this unusual prediction. Moreover, Some even formed a community and launched a website dedicated exclusively to tracking the progress in the hike of Bitcoin prices.

But the recent price that Bitcoin has been trading at currently, seems impossible to reach such a prediction at this point. Still, it cannot be ruled out altogether, since this is Bitcoin and anything can happen anytime. The prices can surprisingly go on parabolic rallies and spike by thousands of percentages in relatively short timeframes, thereby crossing the limit thresholds and outperforming the targets.

However, some analysts are of the opinion that Bitcoin halving would greatly impact the price of Bitcoins. Looking at the trend, Bitcoin could reach $1,000,000 in 2020 and 2023. It is also expected that after 2023 Bitcoin could reach $10,000,000. Halving in the Bitcoin network affects miners in a great way. This is because, at this point in time, mining becomes much less attractive for them due to a reduction in the size of the block rewards.

2020’s Must-knows Before Investing and Trading in Bitcoin