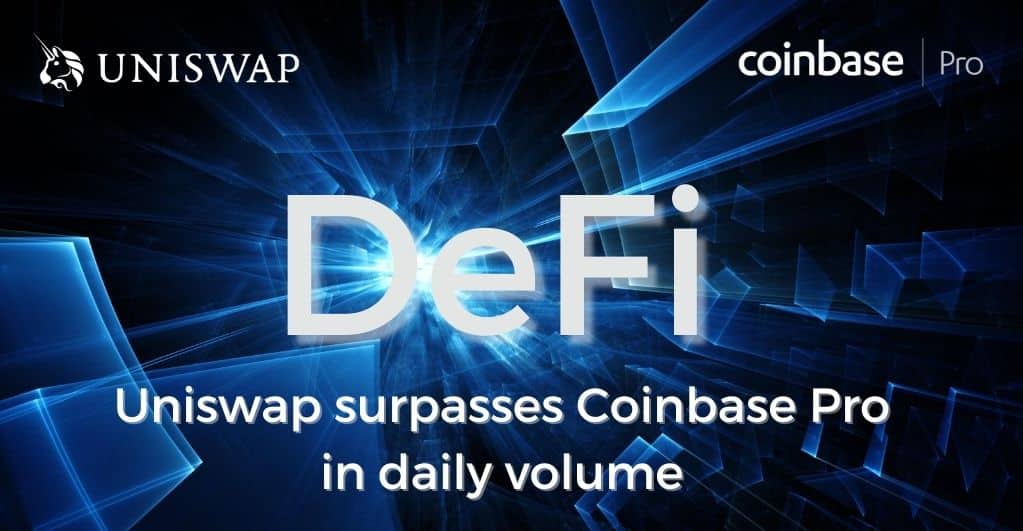 Uniswap, the Decentralized Exchange (DEX) on Ethereum, has experienced a massive surge in its trading volume over the last week, surpassing that of Coinbase Pro, which is one of the largest US-based crypto exchanges. Uniswap allows traders to swap ERC20 tokens pairs in a non-custodial manner. It currently supports leading crypto coins like WBTC, ETH, DAI, BAT, LEND, USDT, and USDC, amongst others.

This is the first time when more money is being traded on a decentralized platform (Uniswap) than in Coinbase Pro. The latest development was fueled after DeFi’s TVL assets (total value of locked assets) closed on an $8 billion mark in the last weekend, which resulted in the surge of trading volumes on the Uniswap platform.

According to recent data, a total of $11 billion of the trade volume has been swapped on other DEX platforms apart from Uniswap; Curve, Ox, and Balancer were amongst them, but Uniswap finished with a massive trade volume that represented 62.8% of all the DEX swaps.

According to the data presented by Uniswap, it processed $426 million trade volume in 24 hrs, whereas, at the same time, Coinbase Pro processed only a $349 trade volume that is nearly around 20% lower than that of Uniswap; this came as a big surprise for the investors.

The surge of the DeFi protocols from $1 billion to $7 billion since June this year is thought to be the main reason behind Uniswap skyrocketed trade volumes. Following the DeFi explosion, most of the DeFi tokens, especially the governance ones, were launched on the Uniswap platform even before they were launched on any centralized exchange.

This abundance of the DeFi tokens on the Uniswap exchange fuelled by the fast expansion of DeFi led to the growth of Uniswap’s trading volumes at an exponential rate. However, the sudden DeFi surge has also been criticized by the fact that it led to the sudden increase in the network fees due to which small transactions came to a halt.

The sudden increase in popularity of the SushiSwap is also thought to be one of the main reasons behind the sudden surge in the trading volume of Uniswap. SushiSwap is similar to Uniswap, with the only difference of a governance token named Sushi that is issued by the SushiSwap exchange; Uniswap does not have any native token.

DeFi supporters congratulated Hayden Adams, the founder of Uniswap, on its success. August 31st also saw Uniswap at its peak with a massive trading volume of $537 million swapped over the past 24 hours. Over the last week, Uniswap contributed over $2 billion to the global trading volume. Adams was overjoyed about this massive record and announced Uniswap’s success in a Tweet stating,

Wow, Uniswap Protocol 24-hour trading volume is higher than Coinbase for the first time ever. Hard to express how crazy this is.

Microsoft Expresses a Desire to Buy the Global Operations of TikTok