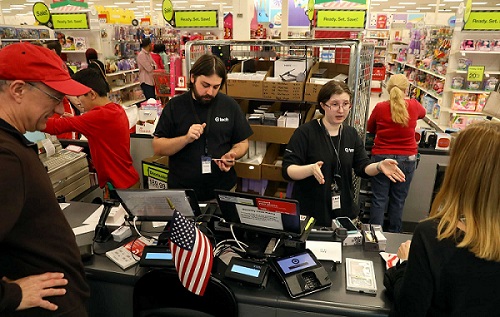 The US service sector recorded the slowest growth rate in the past six months for the month of January, possibly due to the impact of the partial government shutdown on the economy.

A report published on Tuesday by the Institute for Supply Management (ISM) states that the non-manufacturing index dropped by 1.3% to 56.7% from 58% recorded in December last year. The January reading is lowest since July 2018. Since the sector accounts for more than two-thirds of the US economy, the slowing growth rate is a matter of concern and has made the investors wary of market conditions. However, ISM affirmed a solid economic growth, backing their claim by stating that executives of service companies are optimistic about business scenario on the whole.

The decline in the services index was a consequence of a significant fall in the new orders tracking component of 5% to 57.7% from previous month’s reading of 62.7%. The business activity of the service sector, on the other hand, declined at a much lower 1.5% to 59.7%, from 61.2% in December. Despite all this, the jobs in January kept growing, and around 304,000 new jobs were added in the month, which is quite commendable.

The survey of purchasing managers has shown that about 11 non-manufacturing industries recorded growth in January. These industries are Transportation and Warehousing, Healthcare and Social Assistance, Mining, Accommodation, and Food Services, Wholesale Trade, Finance, and Insurance, Utilities, Real Estate, Rental and Leasing, Construction, Professional and Technical Services, and Public Administration. As per the parameters of the ISM, any reading upwards of 50% denotes growth, which means that the American service sector is expanding, that too for the past 108 months consecutively.

Nonetheless, the decline in January is a second consecutive moderation in service activities. Seven service industries recorded a decline, including Retail Trade, Educational Services, Agriculture, Forestry and Fishing, etc. A number of survey respondents admitted that they were holding throughout 35-day long government shutdown, while others said that they were preparing to address the impact on their businesses of the recent US-China trade war, which has resulted in stringent tariffs on Chinese imports by the Trump administration.

Anthony Nieves, Chairperson of ISM’s service sector business survey committee, said in a statement that it is a “wait and see” confidence situation. The recent trade war between number one and two world’s biggest economies has resulted in a global slowdown, and institutions have expressed their fears worldwide as the International Monetary Fund (IMF) did in the recently concluded World Economic Forum in Davos.

The longest government shutdown in the history of the United States began from midnight of 22nd December 2018 and went on for five weeks until 25th January. The federal closure ended after President Donald Trump, and the Congress agreed to temporarily fund the government without cash fuelling the US-Mexico border wall project. A JP Morgan economist, Daniel Silver expressed his views on the decline by stating that the concerns about the shutdown were depressing, but since it has ended, the market might bounce back, though not guaranteed.