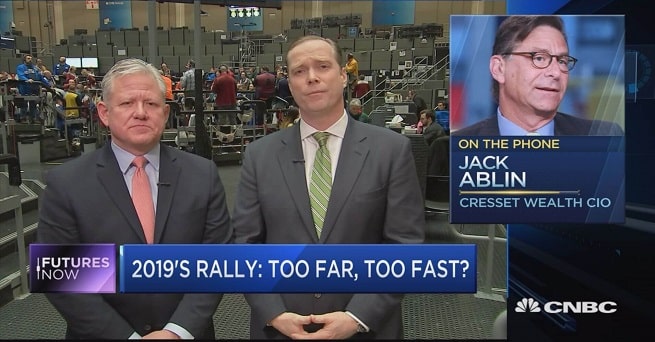 The popular and one of the most successful investor, Jack Ablin said that he believed it would be a sloppy year for the stock market and said that he has a strategy to make more money anyway, by embracing the pullbacks. The chief investment officer of Cresset Wealth Advisors has spoken to a national media house and said that “Most of the 2019 rally has already occurred.” He also said that “We started the year expecting roughly a 9 or so percent return for 2019. We’ve gotten most of it already thanks to a pretty dour outlook among investors going into the new year.” In 2019, the S&P 500 is up 11 percent and is about 6 percent short of its all-time high of 2,940 hit on 21st of September last year. Ablin doesn’t think there’s anything fundamentally wrong with the markets or economy. He’s basing a key portion of his forecast on the relationship between financials and the S&P 500.

He also said that “In general, the stock market likes it when financials do well. And right now, over the last six months, financials have underperformed. That would suggest that equities could struggle over the next six months.” However, the fact is that the financial markets and liquidity, in general, is the lifeblood of the equity market. Ablin, whose firm has now 3.5 billion dollars worth in assets under management, doesn’t expect this year’s pullbacks to match 2018’s corrections. But he contends it’ll still be enough to make profits as long as investors are buying on them.

On the next downturn, Ablin is now planning to add positions to health care, industrials and perhaps the energy. He also likes home builders on softened because of the sentiment in space is highly positive. However, stocks are still negative. The big money question is what could spark the next buying opportunity. But, the solution is still unclear. Ablin has said that “I think it’s more related to the trade policy, But there could be tariffs especially with the Asian country China that is persistent that never go away.” He added That’s something I think investors aren’t banking on, and I don’t think they’ve calculated it into the current pricing.